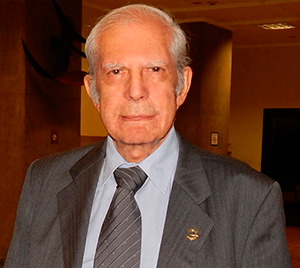 As a rule, editorials express an opinion about a person, a group, or even an ideology.

A good editorial in terms of readability should contain a maximum of 600 or, perhaps exaggerating, 800 words from which it becomes boring and is abandoned by the reader.

This editorial intends to make some considerations about Dr. Ricardo Baroudi, and within the graphic limits, we will compose and weave opinions about the plastic surgeon, the presence he had in the associative activities, and the man.

Dr. Ricardo Baroudi graduated from the Faculdade de Medicina da Universidade de São Paulo in 1957. During his academic life, and even after graduating, he had countless admirers in his embryology classes. His skills in the drawing made explanations simple and easy to understand. His classes had a considerable frequency of students preparing for entrance exams, college students, and even teachers who sought to improve teaching techniques in such arid subject.

Perhaps a little disappointed with the surgical practices of the time that proposed operations that were often mutilating, moved by great sensitivity, he was attracted to plastic surgery. In this effort, thanks to enormous efforts, he attended and interned in the services of several plastic surgeons - national and foreign - learning and developing techniques thanks to his natural talent and manual skills that only the enlightened have. He made 597 presentations - classes, lectures to conferences - with excellent communication skills and unmatched teaching skills, both at national and foreign events. Its curriculum includes more than 140 publications in national and foreign journals with variable but always significant impact. He wrote 12 chapters in national and foreign books and published a one-off book on body contour surgery, disclosing personal techniques, tactical maneuvers that facilitate the surgical approach and patient care.

In 1969, he created the Plastic Surgery Service at the Universidade de Campinas, leading it until 1973. It is possible that in this interregnum, he compiled the data to his doctoral thesis defended in 1976 with distinction.

To be within the limit of the words prescribed for an editorial, it is mandatory to summarize his associative activities. He was secretary and president of the Sociedade Brasileira de Cirurgia Plástica, directing and presiding over several events, the most important of which was the World Congress held in Rio de Janeiro. Undoubtedly, his most outstanding achievement was to ensure the unity of SBCP in a period of great turbulence when groups wanted to separate and create another Society. Skillful politician and with a broad vision, he knew how to make concessions without violating any ethical or moral norm and keeping the SBCP unified.

Among his major contributions to SBCP is the Revista Brasileira de Cirurgia Plástica (RBCP). From 2008 he became editor of the journal, and with hard work, he managed to raise it to SciELO thanks to the increase in the number of publications, without extending the mesh of the sieve, but stimulating the dissemination of knowledge. Many had difficulties in writing and found Dr. Ricardo Baroudi as the mainstay for elaborating their scientific works. Indeed, this support significantly increased the journal's quality, which started to be published in English. Unfortunately, in 2015, he left office due to self-determination, but, with justice, the Deliberative Council granted him the title of Patron of the Journal.

All scientific articles published at www.rbcp.org.br are licensed under a Creative Commons license